Last week, I watched this Korean drama entitled, “Scent of a Woman”. The female main character was diagnosed with a cancer and she only had a few months to live. Before she knew about it, she lived her life allowing people to mistreat and belittle her. Only then after she found out that she got some courage to stand up for herself and do the things that she wanted to do. Realizing that she only had a few months to live, she chose to live her life differently and to the fullest. That’s when she came up with her own bucket list.


If you’ve watched the movie, “The Bucket List” (starring Jack Nicholson and Morgan Freeman), you would know what a bucket list is. 🙂


After I finished the whole drama, I was thinking, a bucket list shouldn’t just be for people who are on the verge of death. I mean, reality is, we all are going there. It’s just really choosing to start living your life to the fullest each day, in the right way. 🙂


And so, I got inspired to start my own bucket list. Some of the things I wrote, it’s been in my mind for a long time. I just need to write them down. Others, things that I just thought of recently that I would like to do.  And some, just today! 🙂

someday, i want to write a book telling great stories of real people

it’s time i take the risk for my hair! :p 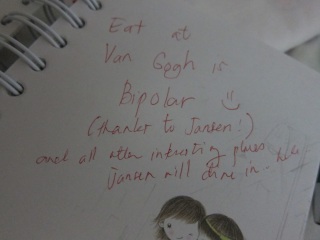 I just wrote this tonight after I read the blog of jansenism
http://jansenism.wordpress.com/2012/05/08/eating-bipolar/
The last scene of the last episode of the drama, she said that she wouldn’t have lived her life to the fullest if she didn’t know about her condition. Then, we should start now, right? When we still have all the time in the world. And as for me, living to the fullest should always be partnered with wisdom.
The thief comes only to steal and kill and destroy; I (Jesus)have come that they may have life, A)”>and have it to the full. – John 10:10